During the discussion, panelists highlighted the key initiatives to address inequality and advocate for sexual and gender minorities’ rights, the importance of representation, and the role of activists and local organizations in fostering change.

Belaunde spoke of the issue with generalizing the entirety of Latin America, pointing out that each country has widely different realities when it comes to LGBTQIA+ rights. He said, “A way of talking about the whole region without being unfair, is realizing that the places that are moving forward and that have marriage equality law, gender equality law, and policies that include LGBTQIA+ people are countries with strong political and judicial institutions.” The solution, he added, is to “create government and public institutions that really understand the idea of being independent and citizen oriented.” 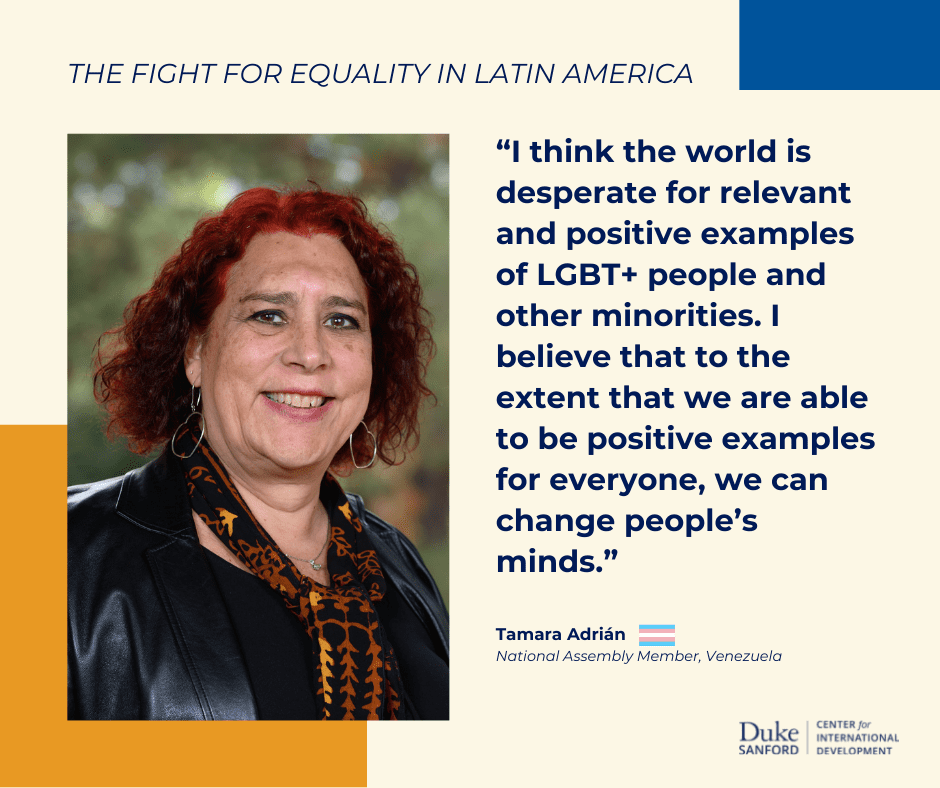 Adrián echoed the disparities between Latin American countries’ LGBTQIA+ rights in Belaunde’s comments. She said, “In Latin America, we have made huge advancements in some countries. You now have equal marriage in 26 states if Mexico. In Costa Rica, Colombia, Ecuador, Brazil, Uruguay, Argentina, and in Chile, LGBTQIA+ rights are under discussion, and in Bolivia, they have an initial decision to allow the registration of same sex couples. You have the recognition of the trans identity in 16 states of Mexico, Costa Rica, Colombia, Ecuador, Brazil, Uruguay, Argentina, Chile, and in Peru, you have some judicial cases that have allowed the recognition of trans people. In other countries, however, LGBTQIA+ people remain second class citizens suffering discrimination.”

Focused on the need for collective action, Morán noted the decline of LGBTQIA+ rights in Guatemala and the importance of continued community organizing to prevent further backslide. “Instead of going forward, we are going backward, because the government is getting more conservative and continues saying that every action we are doing belongs to the gender ideology that goes against family and good education for children, destroying marriage and family. As more political parties are using this narrative, we cannot talk about LGBTQIA+ proposals in Congress… Even with this situation, however, organizations are still working and are still asking for public policy for LGBTQIA+ rights.”

“There is a huge misconception in politics that the only consequences of governments’ neglect of LGBTQIA+ rights are that we cannot marry or buy houses together,” MIDP Fellow and moderator Gonzalo Meneses added. “Government neglect of sexual minorities translate into psychological and physical violence not only from family and security forces who are supposed to protect us, but also from normal people in the streets who won’t even allow us to walk undisturbed.”

In concluding the panel, Meneses said, “It is very important for us to remember that the LGBTQIA+ community is a community that is present in every other community, so working for us, is working for you as well.”

Click on the link to watch more: The Fight for Equality in Latin America: How LGBTIQ+ Policymakers Are Advocating for Change.

This past year, DCID facilitated the signing of an...
Engagement

When the COVID-19 pandemic shuttered classroom doors around the...
Engagement

From the impacts of COVID-19 on women to groundbreaking...
Engagement

On February 23, the Duke Center for International Development...